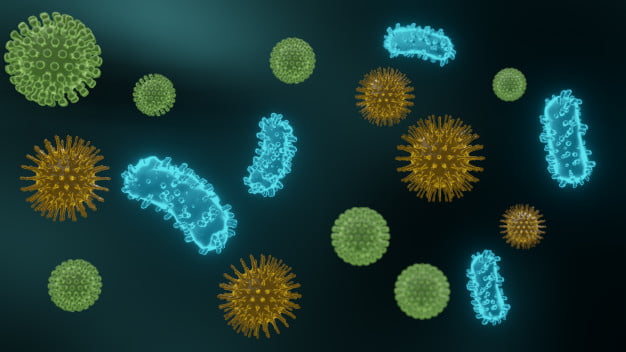 There’s More To Germs Than Meets The Eye

They might not be quite the culprits they seem…

Never in human history has more attention been paid to the problem of infectious disease.

We turn to our scientists for help.

It’s a bit of a bloodbath, by all accounts.

What Does it Take to Keep Humankind Well?

Look briefly into the subject of infectious disease and we are told that microbes (pathogens) cause disease and we need to find ways to eliminate them, (Germ Theory).

Look a bit deeper into the cause of disease and we discover there’s more to germs than meets the eye.

That’s when we encounter the 19th Century ‘Germ Theory (GT) versus Terrain Theory (TT)’ debate, which rages to this day.

“Our job as living beings is to not be decaying matter! “
— Dr Jockers

Which Side Is Right?

In the search for definitive answers on germ vs terrain, as with any contentious argument, there’s fierce debate
between scientists.

Merinda Teller, Ph.D. MPH, urges us to consider the history behind our current world view of dis-ease and pathology. In her detailed article, Germ Theory Vs Terrain: The Wrong Side Won the Day, she describes the schism in medical science resulting from the competition between two scientific giants of the late 19th century, Louis Pasteur (father of modern-day pasteurisation) and Antoine Béchamp, with the scientist Claude Bernard further developing the concept Terrain Theory.

Why look that far back?

The conflicting theories of the late 19th century didn’t just foster ongoing debate. They changed the world view of how pathogenic disease works.

They make you buy bleach.

Which isn’t necessarily a bad thing… unless there’s more to germ theory than meets the eye.

Why Does The History Matter?

Teller states that political and religious/cultural influence was on Pasteur’s side, and his views formed a compelling driver for massive pharmaceutical investment — and unimaginable profit.

Political power with an obscene potential for profit, could these factors have skewed the field of scientific endeavour from that point? Teller is certain that they did.

And she’s not alone.

The problem, as Teller states it, is that once a rift occurs in the research field, money, time, skill is disproportionately allocated to the side that ‘won’ the debate. Which means evidence is produced along one line of enquiry, almost to the exclusion of the other, which becomes labelled ‘alternative’.

The unpopular alternative theory has not been ultimately disproved, it’s just neglected. It loses the attention of the mainstream which builds huge momentum based on the theory it’s following.

Before we know it, the theory with backing appears to be the only theory in town. The world view is magnified by media coverage and the muggles (non-medical folks) are taught that germs are ‘bad’, that we’re at war with the microbe and we find ourselves striving to sterilise the world.

The Problem With The War Against Germs

It interferes with nature as a self-correcting intelligence

The power of the natural world to adapt and heal relies on diversity. Diversity enables flexibility. When stressors occur, having a vast array of options — like a fully stocked construction kit — means that change and new adaptations are easily within reach.

Limit the array — say, by introducing chemicals to the body that strip the gut of bacteria — and we have a whole different problem to deal with. Now we’re trying to build a house with a Lego set consisting solely of window frames.

By viewing germs as the enemy, we set ourselves at odds with nature. We separate ourselves from the very system that created us. We limit our own bodies’ capacity to heal and thrive, by disrupting the internal terrain. When dis-ease is present, we may need to seek strong measures to aid the body’s recovery. But we need to bear in mind the reduction in efficacy that these measures invariably inflict.

“Leave your drugs in the chemist’s pot if you can cure your patient with food.” — Hippocrates

Where Is META Consciousness In All of This?

META Conscious practitioners know the human body to be vastly intelligent and adapt to its environment. We see the rhythm of anabolic (building up cells and tissues) and catabolic (breaking them down) processes inherent in every aspect of the natural world.

The human body is not different to the natural world. It is part of it.  META Consciousness directs us to see the human body as exactly what it is, each human is a unique ecosystem.  The terrain is not only the environment, it is our beliefs, it is our thoughts and actions, it is our home and our friends, and family, it is the food that we eat, it is how we interact with each other.

On a cellular level, we are born to live our physical cycle and then to die.

However as humans we are also born to experience life as sentient beings. We think, we love, we hate, we dream and desire… and so much more.

The problem is, we’ve been conditioned to be ‘human doings’… (“What do you do?” Isn’t this the first question we get asked when we meet someone new?)

We have domesticated ourselves. We’ve suppressed our innate animal instincts and behaviours, to be accepted by our social group. The more civilised and sophisticated we’ve become, the further removed we are from our primal drives and needs. This isn’t bad or good. I’m not suggesting that we should swing from the light fittings and poop on the dinner table!

But it is what’s causing a lot of problems as we get stuck between life and death. We don’t do what the wild animals do to release shocks and trauma. (Think of the shaking gazelle on the Serengeti, when it escapes the lion) We repress them.  We’re unaware of what the body’s really trying to do when we get sick.

When we have an emotional conflict it hits our heart, our brain and a specific tissue associated with that part of the brain.

If we don’t  release that Unexpected, Dramatic, Isolating, No strategy conflict  (UDIN) due to our domestication, (it’s not polite to fight… etc) then we start the process of DIS-ease.

Our cells then start either decay or growth processes for a purpose. The body endeavours to equip us, animal style, for the danger the conflict suggests we’re in. Even when the danger is long past.  As each cell adapts, I will reiterate this is neither good nor bad, simply an adaptation in order to keep us alive. However due to our domestication we get trapped in that cycle, hence chronic dis-ease

If the body hasn’t ‘acted out’ the shock, it starts building up or breaking down cells to help us cope.

This makes no sense according to western medicine, I know!

Let me tell you more… I’m writing a series of articles to explore and explain the purpose of our body’s dis-ease responses to shock and trauma. Join me  in the next article –  Flu – What’s Really Going On?

Meantime, be good to yourself. Cherish the beautiful being you are!